Let’s have a look at the most common kinds of financial crime prevalent today and their magnitude of threat:-

Account Takeover: Account takeover involves having a fraudster take over another person’s account, first by gathering personal information about the intended victim, then contacting their card issuer by impersonating the genuine cardholder, and asking for mail to be redirected to a new address. As per a study conducted by Phishlabs in 2013, account takeover fraud grew annually by 69% worldwide.

Application Fraud: Application fraud takes place when a fraudster uses stolen or fake documents to open an account in another person’s name.

Check Fraud: Check fraud involves making use of checks unlawfully in order to acquire or borrow funds that do not exist within the account balance. As per a report released in 2014 by JPMC, 82% of bankers surveyed reported that checks were the primary target for fraud attacks at their companies.

Internal Fraud: Internal fraud is broadly defined as an employee’s misuse or misappropriation of an employer’s resources or assets for personal gain. 72% of organizations worldwide are said to have been plagued with insider fraud sometime or the other.

Money Laundering: Money laundering is the process of creating the appearance that large amounts of money obtained from serious crimes, such as drug trafficking or terrorist activity have originated from a legitimate source. According to a recent report released by KPMG, 88% of bankers globally see AML as a priority.

Phishing: Phishing is the attempt to acquire sensitive information such as usernames, passwords, and credit card details (and sometimes, indirectly, money) by masquerading as a trustworthy entity in an electronic communication. Reports suggest that an estimated 5.9 Billion USD was lost to phishing in 2013 alone with North America being the most targeted geography.

Implications of financial crime are extensive. High-profile frauds & money laundering not only cause massive monetary losses but often lead to litigation costs due to non-compliance of various regulations. Apart from financial damages, organizations face irreparable blow to their reputation and hence end up losing potential customers. The only viable solution lies in implementing a strong combat mechanism that protects organizations against multi-channel fraud in real-time.

Initially, fraud was mostly an opportunistic crime committed by small-time fraudsters. But today, the banks and their customers face a very different world. As the size and sophistication of products, channels and services have grown, so have the types of fraud. Money laundering is also proving to be one of the most prevalent kinds of financial crime today. Therefore coming up with a robust combat strategy is essential for the management of financial crime. It involves the following:-

Alignment of Anti-money laundering & Anti-fraud efforts: Both fraud risk and money laundering are key containment areas within an organization with respect to operational risk management. It makes sense for the banks to implement a unified platform for both anti-fraud & AML that will facilitate optimization of the efforts of investigation teams.

Influencing outcome in real-time: Financial Crime has traditionally been detected through an array of post facto analysis software. While these systems are immensely effective in all the regulatory reporting, the one thing they fundamentally lack is to influence an outcome at point of interaction. Though most of the current generation fraud detection systems work in near real-time for processing transactions, banks need real-time fraud detection systems which can process banking events from core banking systems within milliseconds.

There is more to the ideal combat strategy. To know further, download our e-book ‘Guide to Managing Financial Crime in 2015’ here. 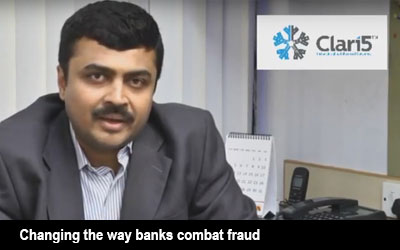